Let’s talk about Panama. I’d been thinking about taking a trip to Central America and narrowed it down to Panama, Costa Rica, and Honduras. I’d heard great things about all three but was undecided on which to choose. Literally no more than the day after having a conversation about the three countries, a deal popped up for Baltimore to Panama. I accepted that as my sign and booked my ticket.

Fast forward a month, and we arrived in Panama on a Friday evening severely delayed due to plane issues. We went to our hotel the American Trade Hotel which is centrally located in the Casco Viejo area of Panama City. The hotel offered old world charm with all of the modern conveniences. 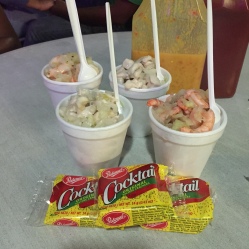 Since we’d heard great things about the fish and ceviche markets, of course that was our first stop. The ceviche market was about a 10 minute walk from our hotel. It was like nothing I’d ever seen, an open-air cafeteria of sorts with stall after stall of every type of ceviche you could imagine. If you’re expecting a 5 star experience, this ain’t it. Your ceviche will come in a styrofoam cup with a pack of Saltine crackers. We paid about $3, for 2 small cups. There were also drink carts where you could order a daiquiri, mojito, piña colada or any other tropical drink of your liking with or without alcohol. All in all, we paid about $8 for a complete meal which included a cocktail.

The most interesting part of it was there were people of all ages. There were young people celebrating birthdays, families enjoying the evening with their kids and others just celebrating it being Friday. There was music playing from a few of the stalls and people dancing. Definitely a lot going on but we felt like a part of the community. I’m sure the fact that we looked like the people there helped. By 10 o’clock the music stopped and the workers began putting up the tables and chairs. We took that as our cue to leave. 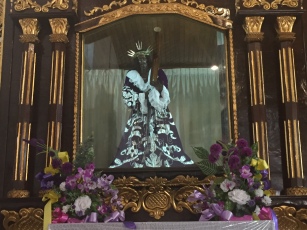 Our driver spoke limited English so it wasn’t much of a tour, he basically served as our private driver and pointed out a few sites along the way. I’d been looking forward to visiting Black Christ Church to see Cristo Negro, or the Black Jesus. Definitely a must visit. The afternoon was spent on the beach at Isla Langosta. Nice beach and not at all crowded for a Saturday in July. We enjoyed a late lunch and relaxed for a bit before heading back.

Casco Viejo Food & Drink Tour
That evening we did a Taste of Panama City: Walking Tour. Our tour guide Kevin was an expat from Boston. While it was very informative, the tour was light on food (we had more ceviche and a piece of chocolate) so we were hungry afterwards. The highlight 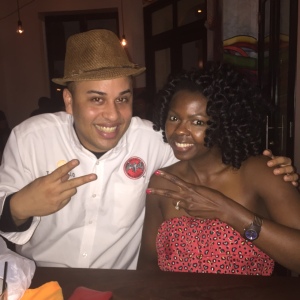 of the tour was sipping some Ron Abuelo, a Panamanian rum, on the rooftop of the trendy hotel, right at sunset. Such a perfect ending to a very full day in Panama.

On the main level of the hotel was their restaurant, Tantalo Kitchen. The food smelled amazing and we’d read great reviews so we decided to venture downstairs for dinner. Of course it was packed but fortunately we didn’t have to wait. Our waiter made the evening even more entertaining. The drinks were strong and the tapas were delicious. What could be better!

Panama Canal
It wouldn’t be a trip to Panama without visiting the infamous Panama Canal, right? We decided to start with breakfast and found a quaint coffee shop just around the corner from our hotel called Casa Sucre. We met the owners, a couple originally from California who visited Panama years ago, fell in love with the country, and decided to stay. They bought the building before the city began going through gentrification and the rest is history. The funniest part was talking to the wife, when she found out my friend was from Atlanta, she asked her if she’d ever met NeNe (from Real Housewives of Atlanta). Hilarious!

From there were caught an Uber to the Panama Canal, yes they have Uber there. We got there just in time to see a huge cargo ship enter the locks and traverse the canal. It was about a 30 minute ordeal but it was fascinating to watch. If you go make sure to stand by the railing so you can get a good view and actually see how the system works.

An Authentic Panamanian Meal
The next stop was the Albrook Mall. So I’d heard one of the best restaurants in Panama

City was located at the mall. Random, I know. When I say that mall was huge, Mall of America, had nothing on it. After walking for what felt like an eternity through the various regions of the mall, we finally made it to El Trapiche.

Apparently people from all around, locals and foreigners alike come to the mall just to eat at this restaurant. Our meal was everything I’d hoped it would be. It definitely gave us a true sense of what authentic Panamanian food tasted like. The best part was it was very affordable and they had free

Our extended weekend in Panama was far too short. I can’t wait to get back and have ceviche every night. Exploring the western part of the country would be nice too.